“The boots are better all-round than our old boots, much lighter, more comfortable and more flexible. They mould to the shape of your foot..”

Challenges
Late last year, uvex was invited in to a well-known car manufacturer’s factory to conduct a footwear trial, which was making modifications of the production line ready for a new car model.

Although the production line workers had been using antifatigue matting since 2001 to try to make the workers’ life more comfortable, the matting had been identified as the cause for some safety incidence as well as splitting and wearing in places, leading to unevenness and causing slips and trips. Additionally, workers were finding that they could not always get close enough to the machinery on the line and had to overstretch themselves. This was obviously not a satisfactory situation, so the company decided to investigate alternatives to the matting.

Before the trial
Before the trial took place, 53% of workers reported that their feet ached at the end of their shift. The average comfort score for their shoes was only 5.69 out of 10, clearly not good enough as each person walked an average 51.9 miles during the course of each working week.

Not surprisingly, workers complained of tired feet when walking around the factory. The antifatigue matting did little to assuage this, so it was decided ultimately to remove it and try out safety footwear instead.

The company’s assembly department had already been using the uvex 1 safety footwear in a perforated version for some time with great success, so this department decided to trial its workers with the uvex 1 safety boot for a minimum of three weeks, alongside other makes and models of footwear.

The 16 workers who took part were asked to fill in both pre-and post-trial questionnaires on the comfort and effectiveness of their footwear and were thoroughly assessed by safety staff.

Why uvex 1?
The multipurpose uvex 1 is specifically designed for all-day use in indoor or lighter environments such as factories, warehouses and logistics providing excellent grip and comfort.

The heel support system integrated into the sole encases the foot for greater stability without limiting freedom of movement and gives additional side impact protection. The dual layer, low weight PU sole, with removable antistatic comfortable insole, delivers outstanding impact absorption minimising potential back, knee and joint problems, particularly when standing. Elastic laces allow shoes to be quickly adjusted, slipped on or off and expand and contract as feet swell and cool throughout the day.

The footwear is ultra-light, due to high tech materials and the virtually seam free design made from microvelour to eliminate pressure points.

The uvex 1 is available in a massive range of sizes, from 3.5 to 17 with some styles and sizes designed specifically for women to give a better, more comfortable fit.

The results – how uvex 1 solved the company’s problems
The wearers of the uvex 1 safety boot reported an average score for comfort of 7.8 out of 10, a 38% improvement on the score of 5.69 given for their previous footwear.

The wearers reported a massive 53% reduction in aching soles of their feet at the end of their shifts, together with a 35% improvement in all-important grip.

The uvex 1 boots were 66% lighter than their old footwear, and 31% more stable. A pair of uvex 1 boots weighed in only 1004 grams, compared with other brands that weighed over 1800 grams. This weight reduction helps alleviate fatigue a wearer may feel during or at the end of a shift as less energy is exerted to complete their tasks compared to heavier more cumbersome items of PPE. For example, steps in a mile x miles walked x 796g = extra weight carried in a week. It also makes them much safer in the hazardous workplace.

"The boots are better all-round than our old boots, much lighter, more comfortable and more flexible. They mould to the shape of your foot."

"The boots are comfortable, very lightweight and have excellent grip."

"They are a big improvement. Comfortable and lightweight, there is no need for the extra insoles I had to have in all previous footwear."

Based on the results of this trial, the car manufacturer was so pleased with its employees’ response to the uvex 1, it has gone on to place an initial stock order for 382 pairs of the safety footwear. It won’t be refitting its antifatigue matting any time soon as the uvex 1 has eliminated the need for it. A win-win all round. 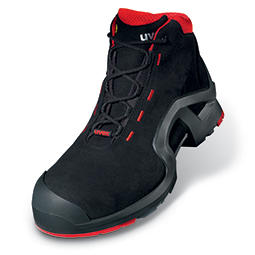