Paul Chick MBE is Head of Transport Services for Dorset Police and is responsible for transport strategy, strategic policy decisions on the procurement, maintenance and safe running of the force’s entire fleet of 450 vehicles, boats and transport-related equipment; with the fleet covering an annual mileage in excess of 6.5 million.

Dorset police force is one of the smaller but highest-performing police forces in the UK and has responsibility for the 89 miles of beautiful coastline Dorset enjoys, as well as for the wellbeing of residents and the many thousands of visitors to the area.

Paul’s job includes the successful strategic management of the force’s marine resources and assets as well as all aspects of transport. He is responsible for around 20 dedicated transport staff, plus specialist contractors.

In January 2012 Paul was awarded an MBE for his services to young people in the local community.

2012 Olympic and Paralympic Games
The international sailing and water sports events of the 2012 Olympics were held in Weymouth and Portland; on Paul’s patch. This entailed an unprecedented 67-day round-the-clock police operation requiring specialist teams, and was the largest on-water security operation in the history of UK policing.

Paul had to deliver policing for the games on-target and on-budget and it was while he was Maritime Operations Manager during the Games - responsible for equipment, procurement, people and assets on the water - that Paul’s relationship with uvex began.

For the Olympic events, several hundred specialist officers on the 50-plus boats (RIBs) were provided with a full range of personal protective equipment (PPE), including uvex pheos protective sunglasses and uvex hi-com disposable earplugs.

uvex pheos
Although traditionally, crews on RIB’s wear their own - often expensive - branded sunglasses, there were no guarantees that they would meet stringent H&S legislation and having the potential for users to experience problems with lenses misting up and spray that would not clear from the lens.

Having tried out several different types and brands of safety eyewear and getting feedback from users, Paul chose the uvex pheos sunglare safety spectacle with 100% UV filter, winner of the German Design Award in 2013.

“We needed protective sunglasses for all police personnel engaged in the operations on the water,” explains Paul. “I looked for quality, innovation, durability, value for money, whole-life cost effectiveness and a design that met the corporate image.”

Paul says that the uvex pheos far exceeded the force’s requirements. “We have never had even one complaint; there have been no breakages and no criticism of the design. The quality of the uvex pheos went way beyond our expectations,” he affirms.

The durability and comfort of the uvex pheos were put to the test by being worn for 12 hours a day, every single day of the Olympics. “The glasses allowed the Police Officers to stay on the water throughout their shifts,” reports Paul. “The outstanding design perfectly fitted our corporate image, with all teams dressed in black. All the products were delivered on time and within budget and complied with the required safety legislation. Another advantage was that the uvex pheos comes in a choice of two sizes to suit different sized heads.”

Benefits of uvex eyewear
Increased wear by officers was one of the main benefits of the uvex pheos. “Wearers take ownership of the product, look after it and make it last longer,” notes Paul. “It’s easy for us as managers and we also have a happier workforce. We can issue the glasses and then forget them.”

Paul aims for consistency across his fleet – the same boats, clothing, helmets and safety glasses, so members of the public can easily identify them. The uvex pheos wrap around style gives good peripheral vision and he has no safety concerns because they fully meet legal standards. The specs reduce the risk from both UV and wind exposure.

The anti-fog and scratch-resistant coatings as standard on the uvex eyewear are an added bonus, as it means the officers do not have to keep taking them off and cleaning them. Sea spray and salt are both very important issues on the water and the coatings keep the lens cleaner for longer.

“uvex products were instrumental in assisting in the successful implementation of the Olympic Games,” states Paul.

Looking forward
Since using uvex products for the Olympics, the force is increasing its stock of uvex equipment considerably and is now investigating a complete range of health and safety products, including safety boots and gloves, not only for the marine force, but also for frontline support staff.

A new range of safety glasses, the uvex polavision, is currently being trialled. “We are looking at using them as a marine standard stock item for marine officers,” says Paul. The uvex polavision is a twin-lensed sun spectacle with a polarised filter that eliminates nuisance from mirroring and sun reflections, always a problem on the water and in maritime environments.

The force has a brand new Humber RIB just coming into commission on which the uvex polavision specs will be used. “All feedback is very positive so far,” reports Paul.

“uvex is a brand that Dorset police have come to respect in terms of functionality and safety levels,” concludes Paul. Working with uvex is an easy option.” 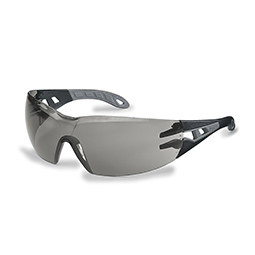