Though rare, high-pressure fluid injection injuries are characterised by a small puncture wound that, unfortunately, is often overlooked or underestimated as the initial symptoms of the small wound are mild. However, if not treated promptly and properly, the injected substance can cause extensive tissue damage and even loss of the limb. Being aware of fluid-injection hazards and the potential harm that can result from pinhole leaks in high-pressure hydraulic systems is imperative to keeping your hands safe.

A Supervisor suffered a serious injury when a hydraulic hose burst and injected hydraulic oil into his hand. The Supervisor needed emergency surgery in hospital to treat the injury. This is not the first incident of its kind. A few years ago a quarry operative suffered a fluid injection injury from a pinhole break in a hydraulic hose. On that occasion the operative did not realise he had been injected and did not seek immediate medical attention. It was several hours later, when swelling and pain appeared, that medical attention was sought, and by that time he also needed to undergo emergency surgery in hospital.

High-pressure equipment such as hydraulic lines, high-pressure grease guns and high-pressure fuel injection systems have the potential to cause serious injury or even death if not properly used and properly maintained. Fluid in this type of equipment is under pressure ranging from 600psi to 12,000psi (4MN/m2 to 83MN/m2). The velocity of fluid forced through a pinhole break in a hydraulic hose can be in excess of 250 metres per second (600ft/s). This is close to the muzzle velocity of a rifle, and is sufficient to drive fluids through protective clothing, including protective gloves. Penetration of the skin can occur at pressures as low as 100psi (700kN/m2).

Even fluid streams as little as 100 PSI can penetrate deep under human skin, similar to how a hypodermic needle pierces the skin, resulting in injury.

Fluids such as oil, chemicals, or solvents could end up in the bloodstream. 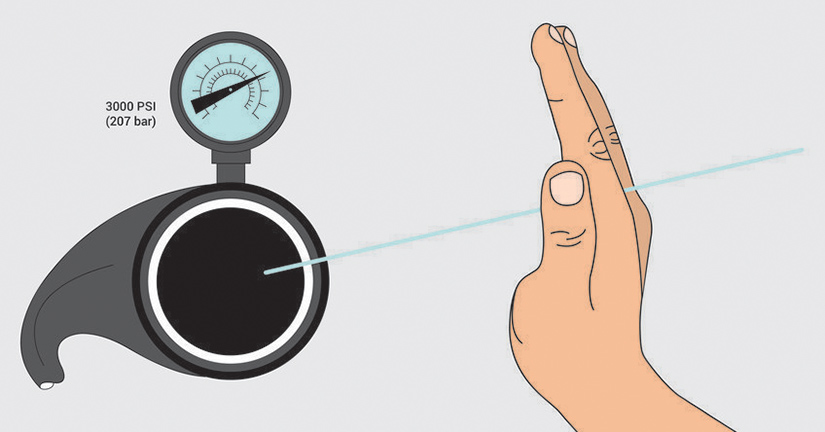 Why are high-pressure injection injuries so serious?
High-pressure injection injuries usually require emergency surgical treatment. When fluid enters the body it begins to kill tissue and gangrene can set in if the injury is not treated promptly. There is also a risk of blood poisoning and bacterial infection. Surgery is usually required to remove the dead tissue and clean out the injected fluid from the wound. Fluid injection is often painless and the point of entry through the skin is usually very small and has a harmless appearance. Pain and swelling may not appear for several hours after injection and sometimes it can take a couple of days before pain and swelling are experienced.

High-pressure fluid injection injuries often occur when checking for leaks in the system, which are often difficult to locate and are only apparent because fluid is evident nearby. If an employee is unable to see the leak, they may run a hand or finger along the line to find it. When the pinhole is reached, the fluid can easily be injected into the skin as if from a hypodermic syringe. Pinhole bursts often occur where there is already surface abrasion damage to the hose.

The key to protection
Fluid injection injuries are caused by high-pressure pinhole leaks similar in nature to a hypodermic needle penetrating the skin. UVEX subsidiary HexArmor has been a glove safety leader in North America for over 15 years, redefining the hand safety market. Task specific HexArmor gloves with SuperFabric® brand material have been validated as an effective protective material for this hazard using specific parameters. Independent Lab test results confirm that gloves manufactured for fluid injection resistance with SuperFabric® brand material offer protection at pressures up to 10,150 PSI (700 bar) with apertures ranging in size from 0.002 to 0.01 in. (0.05 to 0.3 mm) using standard hydraulic oil.

If you have any questions about preventing high-pressure fluid injection injuries or about the industry leading cut and needlestick resistance that HexArmor SuperFabric® brand material provides contact our glove specialist for more information.