When Hochtief Murphy Joint Venture (HMJV) discovered the safety boots it had issued to its workers on the £14bn Crossrail project were not only uncomfortable, but were falling apart after a couple of months use, the company turned to uvex for a solution.

A joint venture partnership between German giant Hochtief Solutions and J. Murphy & Sons known as HMJV is currently constructing twin-bore 2.6km-long tunnels under the River Thames for the ambitious project that will link east and west London rail routes. Scheduled for completion in 2015, the tunnels will connect Plumstead to North Woolwich and link the existing north Kent rail line to Crossrail. With the realisation of this important infrastructure project the joint venture will provide a key solution for improved transport links in the capital.

The problems
Early problems arose with the supplier of work boots for use on the Crossrail contract. “We received numerous complaints from employees of the boots falling apart, being uncomfortable and in some cases giving the wearers blisters,” says Eamonn. They had to be replaced every two months on average when worn in the toughest construction areas on site.

HMJV then tried slightly more expensive boots from a second supplier, but found these boots were not durable enough for the challenging working environment; requiring replacement around every four months.

The solution
After a visit from uvex, HMJV decided to trial the uvex Quatro Pro Safety Boot. The Quatro Pro has a unique design with the boot already shaped to the natural contours of a foot. Its insole has a moisture control system which helps keep the feet dry. It has a broad fit and a self-cleaning profile to reduce a build-up of contamination, allowing for better grip. It also has added rubber toe protection to improve durability and provides a comfortable fit from new.

The results
“The results of the trial were amazing,” Eamonn enthuses. “Every person who trialled the boot preferred it to any other boot they had ever worn. Word spread quickly around site and we were inundated with requests for the Quatro Pro.”

HMJV was initially concerned about the higher cost of the boot, so the trial was extended to monitor wear and tear. While the boots sourced by HMJV at the beginning of the Crossrail project had a lifecycle of around two months, after two months on trial in the same area, the Quatro Pro was still in good condition. “We received no complaints regarding the comfort of the boot and we knew its design would prove beneficial to the wearer,” Eamonn confirms.

The benefits
Although the Quatro Pro is more than twice the price of HMJV’s previous boot selection to buy initially, its employees have been happily wearing the same boots for over a year. With a workforce of 250, the cost per year works out as follows:

Thus, proving that whilst the unit cost may be more, the overall benefit in terms of saving and comfort and reliability is huge.

The future
“The Quatro Pro boot is without doubt my first choice by a big margin,” states Eamonn. “The initial investment is repaid with a longer lasting boot and a happier, healthier and safer workforce, not to mention substantial cost savings of around £14,500 each year.” 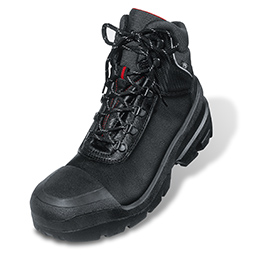