Safety and comfort have been greatly improved by the use of uvex 1 and Heckel Macsole® FXH at a large UK automotive components manufacturer based in the Midlands, where 95% of its 1,100 employees require safety footwear. The £multi-million turnover company have been at their present site for around 130 years and have five manufacturing sites in the UK, plus 125 across the world.

“uvex safety shoes have improved comfort, lifted morale, reduced fatigue, and given outstanding protection from slips, trips and falls. uvex came on site and understood our needs, taking their time to look at the hazards before recommending products. We will always use uvex eye and footwear protection now.”

Challenges
Employees at the company work in varying conditions, including concrete-floored assembly areas and a very oily press shop.

The sealed concrete floors in the assembly areas - on which the workers stand for eight hours a day - are very hard on the foot, while the press environment is extremely oily and slippery around the presses.

“We had really struggled previously with slip-protection in the press area,” explains their health and safety manager. “In a bid to solve this issue we had paid £8,500 for anti-fatigue matting, but it only lasted a few weeks. Not only was this expensive, but the matting was a trip hazard too.”

The company had also been suffering complete failure of the soles of their footwear, finding that operatives went through a pair of boots every six months.

Making the floors safer
“With the Macsole® FXH recommended by uvex as the most suitable footwear for the press area because of its maximum resistance to oils and exceptional grip, safety is built in to the flexible rubber sole so there is no need to buy expensive floor matting,” says the H&S manager. “Safety is ensured wherever you walk.”

The helpful and knowledgeable uvex representative also recommended the light and super-comfortable uvex 1 safety shoe, with its shock-absorbent polyurethane (PU) sole, as the most appropriate footwear for the assembly areas. The uvex 1 is available in both mens and ladies versions, which are built on different lasts because women’s feet are very different from men’s.

The company had previously been using a mix of own-branded shoes and boots, together with a number of well-known footwear brands and a small number of uvex quatro boots. “In all the years I’ve been issuing footwear, we’ve never had a quality concern with the uvex quatro – it’s the single piece of footwear we have never had problems with – so I contacted uvex to see what else they could offer,” adds the H&S manager.

Each type of footwear was trialled for four weeks by people working at the areas permanently, as well as those traversing the site.

“Although uvex boots and shoes are more expensive, we have made considerable savings overall and have improved comfort, morale and protection from slips trips and falls, and we have reduced worker fatigue. All the footwear is SRC-rated with the best slip resistance you can get. They have lasted much longer than the previous footwear we were supplying.”

Wearer feedback
Feedback for both types of shoe was “impeccable”. The wearers spoke highly of them, as they reduced the issues around long-term standing.

The uvex 1 was trialled by assembly technicians, who “absolutely love them. They couldn’t believe how light they are, and how they felt exactly like a normal trainer, yet gave great protection.”

The wearers could not believe the difference in slip resistance with the Macsole® FXH. “They found them robust, sturdy and supportive while standing at the press, giving exceptional slip resistance. They noted a significant improvement in grip, particularly at the checker plate area, where the flooring is composed of metal.

Next steps
The company's H&S manager will roll out the use of uvex’s footwear as best practice across all UK sites including a new facility being completed that will house another 1,000 employees. He will also recommend their use by the company in northern Europe.

uvex pheos eyewear
The company also uses uvex’s scratch and fog-resistant pheos safety spectacles very successfully to provide optimum eye protection. uvex helped them to initiate a care and maintenance regime, installing cleaning stations on the walls to care for the specs and help them to last longer. This will reduce their usage and therefore the company’s costs. “uvex offered us very good advice based on the sustainability of the product,” he says. 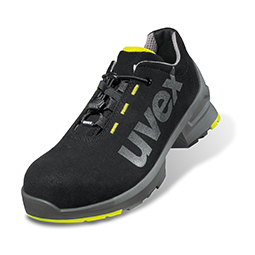 Find out more about our uvex 1 safety shoe range