Site manager Darren Portlock had a narrow escape from a shattered foot when he was hit on the ankle by a flying lump of concrete on a construction site.

The incident happened while Darren was working for MJ Gallagher Contractors on the construction of a major new hospital in Sandwell, near Birmingham.

Fortunately, he had been wearing uvex quatro pro safety boots, whose support padding effectively cushioned his ankle and saved him from serious injury.

The lace-up quatro pro is extremely sturdy and has a water-resistant leather upper, integrated PU scuff and heel cap, foot stabilisers and steel midsole, making it perfect for demanding outdoor applications such as construction. It is also well padded, which helped to keep Darren’s ankle out of harm’s way.

On the morning of 18th May, Darren had been working on the site where several lorries were being backed down a tarmac road to load concrete onto a pumping machine. It is not unusual on a big construction site for there to be pieces of paving slab or lumps of concrete lying around which ground workers use for their backfill.

While Darren was standing by the road, a passing lorry ran over a 1kg lump of paving slab, which caught on the edge of one of its wheels and shot out from under the back of the tyre “like a bullet,” says Darren. “It hit me straight on the ankle.”

Darren was taken to hospital, where doctors reckoned the uvex boot had saved the day. “If I hadn’t been wearing the boot, I could well have broken my ankle,” he observes. As it was, he suffered bruises and damaged ligaments, which could have been much worse had the quatro boot’s ankle support padding not done its job.

“I have worn uvex protective footwear for over 20 years now. They are good boots,” says Darren. “They are strong, tough, but also comfortable, so I can wear them all day long.”

Darren had tried other cheaper boots but they damaged his feet after a few days’ wear, necessitating medical attention. A biochemical foot assessment showed the boots were not as good as uvex’s quatro boots, which corrected the situation when he went back to them. 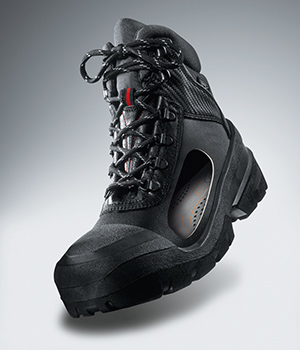 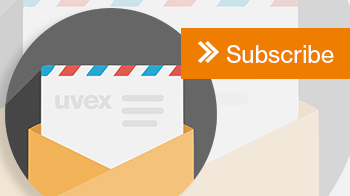